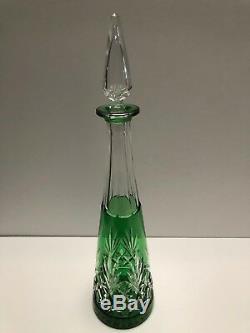 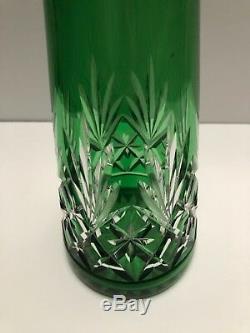 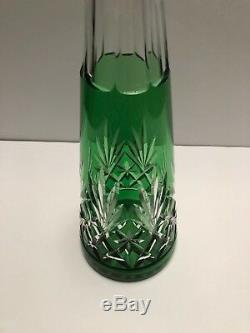 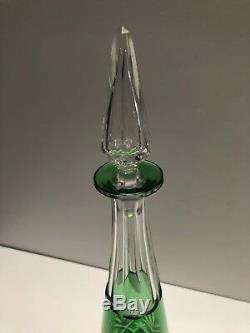 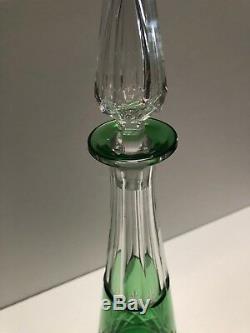 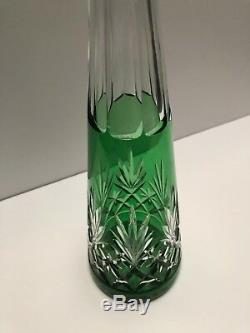 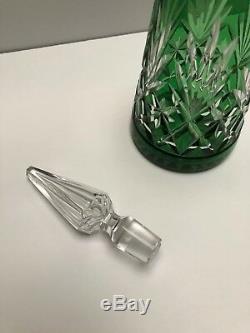 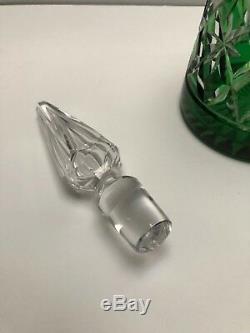 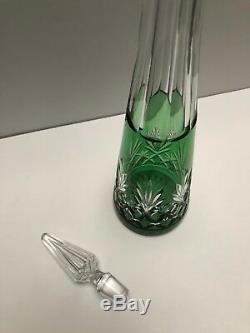 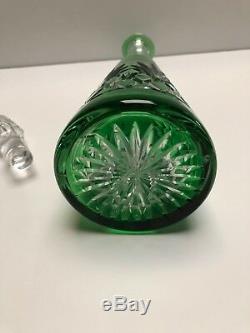 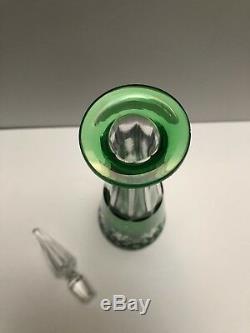 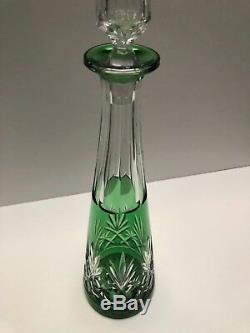 SAINT LOUIS MAGNIFICENT CARVED GREEN CUT TO CLEAR DECANTER. Magnificent and in great condition. Antique elaborate cut cased green decanter. This piece executes many of the fine cutting Saint Louis was famous for. This piece demonstrates the pineapple cut and the cut star and large X cutting around the base. The bottom is finished with the traditional star cut bottom This piece dates from the 1940's. This is a beautiful and magnificent piece demonstrating the masterful work of Saint Louis. Makes a great addition to a collectors collection or as a centerpiece or a focal piece in a vitrine. Dimensions: 16 3/4" high with stopper x 4" base. The Saint Louis works have been established in this forest valley for four centuries: they date back to 1586, when the original glass works were built. They then become the Saint Louis Royal Glass works in 1767, and Campagnie des Cristalleries de Saint Louis in 1819. In 1781 the formula for producing crystal glass, which until then had been the monopoly of England, was discovered at Saint Louis.

It was here, therefoe, that crystal was first manufactured in France. As from this period the Saint Louis glassworks made crystal table services and were given many and varied awards.

In the year VI of the French Revolutionary Calendar a gold medal was received. Its renown began to spread in 1840. Service of 850 pieces was delivered to the Emperor of Brazil and an even more magnificent service to the Empress. Following this, its products began to be exported to the ends of the world. In 1864 the crystal works company of Saint Louis succeeded to deliver the Glass and Crystal Industry from its dependence on wood by adopting coal and open vessels.

Formerly, all glass work ovens were wood heated. This explains why the Industry was centered in thickly forested regions. The items of all kinds that make up the Company s magnificent collection, housed in its private museums, reflect the changing tastes of each era. The period 1815 to 1830, the first year of French crystal, illustrate the attraction of color and the tastes for small bibelots finely worked in opaline or filigree.

Later during the Second Empire, heavy and massive services, richly worked in diamond are predominant. The glasses widen out and become harmoniously balanced. Today a section of the clientele remains faithful to the stately services cut in diamonds points, but apart from its traditional style collection, Saint Louis offers contemporary services some very delicate and some very heavy and cut with wide and deep bevels. Exquisitely luxurious table services were ordered by a refined clientele and in the Company s Paris exhibition halls the models can be viewed of the services used on the tables of such persons as His Majesty the King of Ethiopia, His Highness the Agan Khan, Her Highness the Princess of Monaco, French Ambassadors abroad, Monsieur Sacha Guitry, etc. These are services inlaid with gold or sumptuously cut such as THISTLE, TRIANON.

Some of these services are more than a hundred years old: TRIANON for instance dates from 1830. A series of more modern and more reasonably priced table services exist.

Apart from table services, Saint Louis devotes a section of its production to a number of fancy articles: vase, bowls, and decorative pieces. There is also a chandelier and lamp department. Having thus faithfully met the tastes of a number of generations, the Saint Louis crystal works, whilst preserving the prestige of the past for all to see, are resolutely orientating their activities to the future.

The item "SAINT LOUIS HAND CARVED GREEN CUT TO CLEAR DECANTER" is in sale since Saturday, January 5, 2019. This item is in the category "Pottery & Glass\Glass\Art Glass\French\Other French Art Glass". The seller is "looneyluneville" and is located in Rancho Mirage, California. This item can be shipped worldwide.