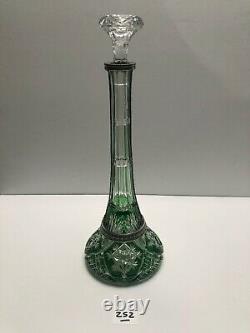 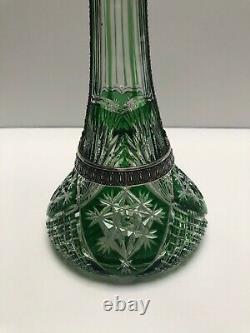 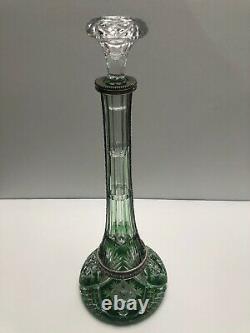 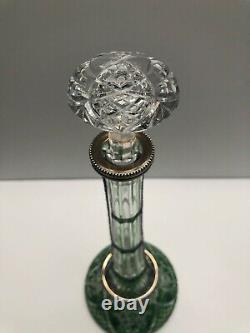 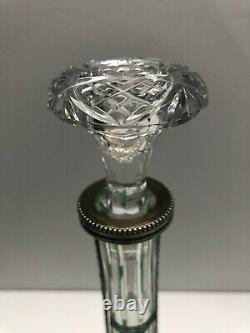 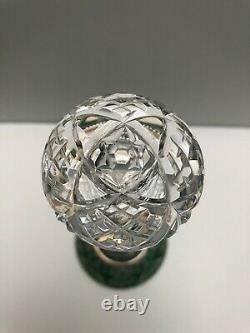 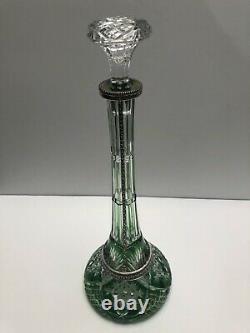 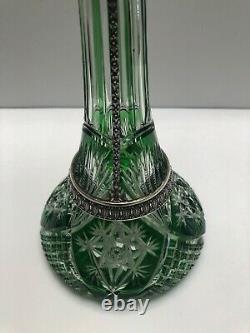 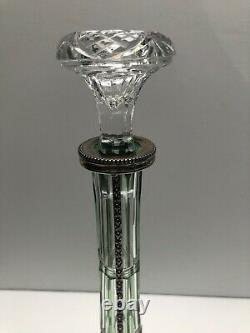 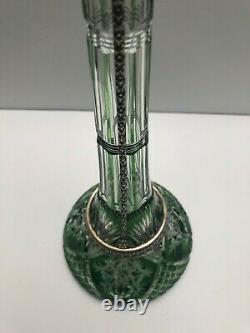 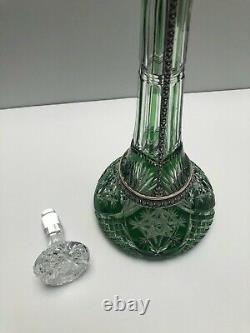 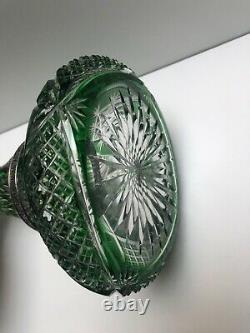 BACCARAT RARE AND MAGNIFCENT EMERALD CUT TO CLEAR AND SILVER DECANTER. Magnificent and in very good condition. Antique large beautifully carved cased emerald green decanter with detailed bands of silver coming down the sides and meeting a wide band at the mid section of the decanter and at the top. Both the decanter and the stopper are number 3 which means they were made together. Since Baccarat worked exclusively with Christofle it is more than likely created in conjunction with them.

This history of Baccarat spans two hundred years, numerous wars, and unsurpassed advancement in crystal design and manufacturing. Baccarat is a small French town of 600 situated 250 miles east of Paris. In 1764, slightly prior to the French Revolution, Monseigneur de Montmorency-Laval, the Bishop of Metz, petitioned King Louis XV to allow him to open a glassworks factory on the banks of the River Meurthe.

The reason for the Bishops interest in opening a glassworks factory was that he owned thousands of acres of old growth forests. In order to turn a profit on the deforestation of his land, the Bishop needed to find some industry that would consume lots of firewood. In 1765, the Compagnie des Cristalleries de Baccarat was established. The Bishop employed the influence of the church to locate an investor to build the factory.

His next move was to find an architect and technician to run the factory. A man named Antoine Renaut was hired to oversee the building and running of the Baccarat factory. Baccarat flourished in the coming decades. By the beginnings of the French Revolution, the company employed a work force of 400 people.

It must be noted that Baccarat was opened during the age of reason and enlightenment. The managers at Baccarat decided to employee many of the social concepts concerning individual rights and human dignity that arose from the new social philosophies of the period. A small utopian community was built at the Baccarat factory that housed over 70 families.

Although Baccarat was ahead of their time in concerning themselves with the welfare of their employees, their motives were not entirely altruistic. The firing of glass at the time was still an imperfect art and was influenced by many factors, including the weather. It was important to have Baccarats master craftsmen very close to the factory in order to produce the best possible product. During this time, the company mainly produced bottles, mirrors, and windows panes. Baccarat met a formidable challenge at the beginning of the French Revolution.

Economic instability was common in France at this time, however, the situation worsened as the country collapsed into civil war. Frances economic situation continued to worsen with the Napoleonic wars that swept across Europe during the early 19th century. By 1816, inflation caused the company to operate at a loss and the work force was reduced to less than 70 people. The purchaser, Monsieur dArtigues bought the company with 2,845 ounces of solid gold.

Monsieur dArtigues was an ambitious man who set his sites on making Baccarat one of the most prestigious names in glass in Europe and the world. In 1838, a manager at Baccarat discovered a way to produce full-lead crystal that could be colored.

The formula was one of the companys most closely guarded trade secrets. However, the information was leaked to the Bohemians living in the area who produced similar works to those of Baccarat. There was no competition between Baccarat and the Bohemians however, as the Bohemian interest was purely artistic and they philosophically were not interested in making a profit. The factory continued to grow in prestige throughout the remainder of the 19th century.

By the end of the 19th century, Baccarat had earned the reputation of being the Crystal of Kings. This title is one that the company bears to this day. Baccarats stemware and objects dart adorned the tables of the late Czar and Czarina of Russia, the Emperor of Japan, the late Sultan of Turkey, the King of Siam, Presidents Theodore Roosevelt and Franklin Delano Roosevelt, the last three kings of France Louis XVIII, Charles X, and Louis Philippe, all the Presidents of the French Republic, the Late Aga Kahn, Pope Benedict XV, President of the Republic of Chile, the former king of Portugal, the late king of Spain, the King of Greece, Emperor Haile Selassie of Ethiopia, the late Wilhelm II of Germany, the US State Departments many legations and European Embassies, all of the Maharajahs of India, and King Ibn of Saudia Arabia. For display pieces for the famous Paris Exhibition of 1889 (the same exhibition during which the Eiffel Tower was built), Baccarat created two of its most popular pattern Harcourt and Gascogne.

Today, Harcourt is one of the Popes stemware patterns at the Vatican. The item "BACCARAT RARE AND MAGNIFCENT EMERALD CUT TO CLEAR AND SILVER DECANTER #252" is in sale since Thursday, May 21, 2020. This item is in the category "Pottery & Glass\Glass\Art Glass\French\Other French Art Glass". The seller is "looneyluneville" and is located in Rancho Mirage, California.